The General 308 Irrigation system primarily serves the downtown core of the City of Yakima.  Having originated in the 1920’s and constructed substantially with wood stave pipe, the system experienced severe leakage and water loss.  The City undertook a Master Plan in 2003 for the Rehabilitation of the 308 Irrigation System.  Carollo Engineers and HLA were engaged by the City to develop the Master Plan to include updating the City’s GIS Database, perform a hydraulic analysis, conduct field investigation, recommend construction methods and materials, and develop an implementation schedule.  This Master Plan was completed in 2004, and the first phase of construction occurred during winter of 2004-2005.

To maintain irrigation service to the large customer area, all improvements and construction occurred during the winter months.  Annual project sizes were evaluated to ensure a contractor could successfully complete work, beginning in October following system shut-down and finishing in March, allowing uninterrupted service to customers.  These winter construction improvements occurred over a span of eight years, installing over 16 miles of new pipe and 1,550 new service connections.

HLA provided all engineering design, services during bidding and award, construction observation, and administration for all phases of work.  This project was completed two years early and significantly under original cost estimates.

Click on the photos below for a larger view. 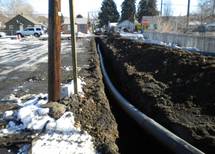 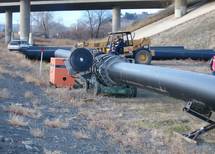 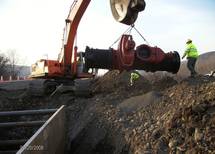